With all of this in mind, we were curious to see how school districts fared across the state of Texas after such a stunning reversal of election trends for school bond propositions. What we found was a slight improvement from the November 2021 bond election. 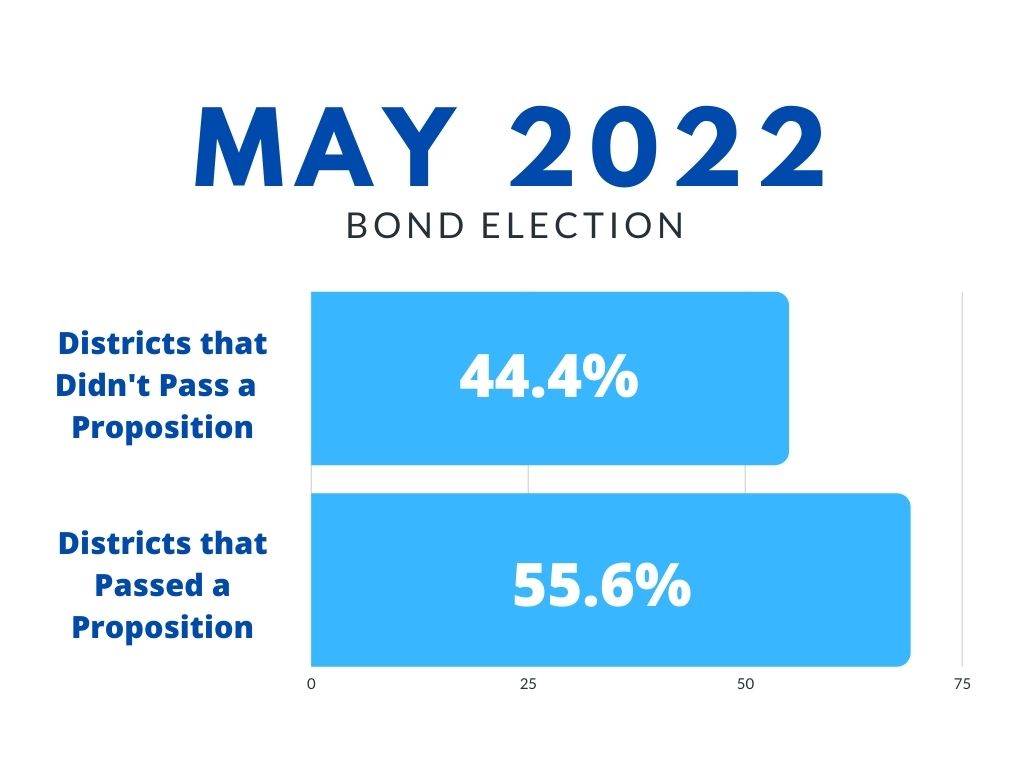 These results reflect an improvement from last November’s bond election, but are still incomprehensibly lower than the results from just one year ago. In just one year, the percentage of bond proposals passing reduced from 73% to just 50.7% with this year’s election.

With back-to-back elections resulting in lower bond success, it could truly reflect the new reality school districts will have to navigate in the coming years.

What do these results mean for the future?

For district leaders that are planning bonds for the November 2022 election or even the 2023 elections, it is highly important to pay attention to these election results. There’s a lot to learn amongst the data coming out of these elections.

Voters are being more cautious about their voting decisions, and are more likely to go against propositions that increase tax margins. This stems from an uncertain political and economic climate that has taken our country and the world by storm.

A few results stood out in particular, such as Bonham ISD’s bond election that was defeated by just one vote with 596 votes for the proposition and 597 against the proposition. This result was preceded by the count being tied after the votes were tallied on election day which, if the result would have held, would have meant the bond would have been defeated anyways.

In another case, Cameron ISD’s bond was passed by just one vote.

You read that correctly… One vote. In both of these cases.

These instances show how important each and every vote is. Every vote truly matters. This means that districts need to be cognizant about how they formulate and sustain relationships with their communities. It is imperative to maintain open and transparent communication about the needs of the district and how they will benefit the greater community.

In an instance where there was likely persistent communication amongst the community, Galveston ISD passed all 4 of their bond propositions which totaled to about $315 million in this year’s election. Building a new high school was received well as the proposition passed with a majority of votes totalling to 61%. Similarly, the community wasn’t hesitant to pass the proposition for new middle school renovations, which garnered 61% votes in favor of the proposition. On a different note, the district had a new aquatics center and new stadium on the ballot, and both wound up passing with 56% and 52.8% of votes, respectively.

In the end, it is true that the elections are trending in the right direction as far as bond propositions being passed. However, it is still important to acknowledge how far off the mark districts are from the results just one year ago.

Now, more than ever is the most important time to ensure that your district maintains decision-making that is data-informed. To gain back the trust of voters, it is imperative that districts fully lay out their important short and long term needs that drive action based on information. Facility Insite gives districts a powerful capital planning tool that empowers them to plan for the future utilizing historical facts alongside accurate and actionable data. Contact us now to learn more about how your district can maximize the power and impact of your bond planning data or schedule a free demo!